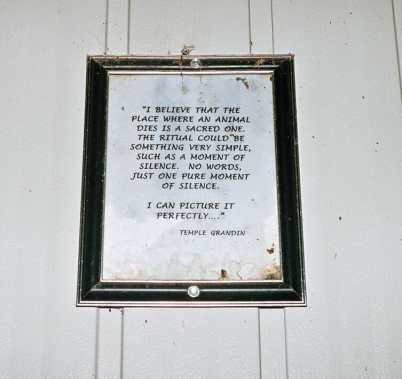 This Temple Grandin quote hangs in a slaughterhouse to remind workers to be “respectful.” Source – Modern Farmer https://modernfarmer.com/2013/04/this-is-what-humane-slaughter-looks-like-is-it-good-enough/

Written by:  Heather Clemenceau (with files from the Canadian Horse Defence Coalition)

Many people are shocked to find out that pregnant animals are routinely slaughtered.  According to the European Food Safety Authority, “on average 3% of dairy cows, 1.5 % of beef cattle, 0.5% of pigs, 0.8% sheep and 0.2% of goats in the EU are slaughtered during the last third of gestation. Reasons may vary – from farmers not being aware that animals are pregnant, to considerations linked to animal health and welfare or economic reasons.”  Horse advocates may be shocked to discover that this also occurs with slaughterbound horses, and there’s really no good explanation for the “why” here, when horses are slaughtered in the last few weeks or days of gestation. Indeed, probably many horse people are convinced that kill buyers and slaughterhouses as a rule, allow mares to “foal-out” on idyllic pastures worthy of a John Constable painting.

give birth during the trip is considered to be “unfit.” While the CFIA veterinarians are responsible for ensuring that transport is compliant, there are not enough of them and it’s highly questionable whether the organization has the will or fortitude to fine or penalize shippers.  We already know that they don’t enforce their own regulations and any existing regulations we have in Canada do not reflect the current science regarding care and handling.

Slaughterhouses are profiting off the suffering of horses, and in particular, pregnant mares and their foals, which are often only discovered upon evisceration of the mare on the slaughter dis-assembly line. Please be advised that the translated sequences of events contain graphic and disturbing accounts of suffering and despair:

He continued to observe the mare and around 2:00 am, he witnessed the birth of the foal noting that it came out with no problems. At around 6:00 am, he called his boss to ask him what to do. The ‘boss’ contacted establishment 505. At 9:00 am the load arrived at the slaughterhouse. The seals were removed. The colt was in the first section of the trailer with his mother and other horses. He seemed in good health. (Name withheld) noted placenta residues and traces of blood where the mare and foal were (see photos: placenta and traces of blood in the trailer, trailer traces of blood). (Name withheld), employee of the slaughterhouse, carried the foal in his arms and brought him into the barn with his mother. The rest of the load were fine. On March 10, 2011 at 8:00 am, I looked at the mare and foal. They seemed in good health. I discussed the case with (name withheld). Around 13:30 (1:30 pm), the foal was euthanized for humane reasons. The mare was shot, in normal fashion, around 14:45 (2:45 pm).”

“A journey of horses imported from the United States arrived at (Les Viandes de la Petite-Nation) establishment designation #505. These horses

Bouvry feedlot – Why aren’t pregnant mares separated? What will be the outcome for this mare and her foal? Photo credit – Animals’ Angels & AWF

left on June 3, 2011 at 22:00 (10:00 p.m.) and arrived on June 5, 2011 at 9:10 am after 35 hours and 10 minutes in the trailer. At first glance, the horses are thirsty and hungry. They are fed and kept awaiting slaughter, to take place on June 6, 2011. On June 6, 2011, during the evisceration, we have 2 mares #4937 USDA and #4439 USDA who have a very large uterus and which each contain a foal I describe as almost to term. The first foal of the mare was black, measured 38.5 inches (98 cm) and weighed 44.8 kg. The second foal of the mare was beige, weighed 56.4 kg and was 40.5 inches long (103 cm). Their weight and length measurements indicate that the mares were in the last 10% of gestation, pregnant more than 300 days. To be precise, I would say that the 2 foals were between 325 to 330 days of gestation, 330 days being the normal time of gestation for mares. A pregnant mare in the last 10% of gestation is considered to be an animal that is fragile and unfit for transportation. Its resistance to the stress of transport is weakened. Article 138 (2) (c) of the Health of Animals Regulations states that it is prohibited to load or to transport to load in a motor vehicle an animal that is likely to give birth during the journey. The hazards related to the stress of the trip, the hazards associated with the travel itself, the lack of drinking water for long hours and the duration of the trip are among the many possible causes of complications in the pregnancy in the transported mare.”

“I recommend that the offender be prosecuted. The owner of the horse should be aware of the state of gestation of the mare before sending to the livestock auction. Lately, I noticed almost full-term fetuses during my post-mortem examinations. People should be made aware of this.”

Pregnant Mare (USDA Slaughter Tag #4617) – Weakened and dehydrated mare is slaughtered, and her live foal is discovered upon evisceration

During my first visit to the pen in the morning of June 13, 2011, I noticed that the mare with USDA #4617 is isolated along the wall and does not move (although) another horse bit her regularly for ten minutes. She is abnormally still. She looks sick. She is dehydrated over 12%, this is evident in the skinfold, and this represents a very serious situation and we could expect an eminent death if action is not taken immediately. (Her) temperature is normal. The mucous membranes of the mouth have a nice colour. Its sides are obvious. (Name withheld) a specialist in animal transport examined this horse. In summary, the mare #4617 is severely dehydrated.

I isolated her from the other horses with unlimited access to water and good hay for her to regain strength. The next day, June 14, 2011, I reexamined her and I find that she is moderately dehydrated to 8%, which represents some improvement. She proceeded to slaughter and at evisceration we have a very large uterus containing a foal that I would call almost to term. Its eyes are open, it weighs 34.8 kg and is 92 cm long. Weight indicates that the mare was in the last 10% of gestation, is pregnant for more than 300 days. The normal length of gestation in the mare is 330 days. A pregnant mare in the last 10% of gestation is considered to be a fragile animal and unfit for transport. Its resistance to stress is weakened. The hazards related to the stress of travel, hazards related to the travel itself, the lack of drinking water for long hours and the duration of the trip are among the many possible causes of complications of pregnancy of the conveyed mare.

This is even more evident, since the mare USDA tag #4617 was deprived of water for transportation and her proximity to a dominant horse was prevented from drinking in the pen at the slaughterhouse. The consequence of the severe dehydration could bring suffering to her and her foal until death ensures. Luckily, I perceived the signs of weakness. She regained strength, which enabled her to have a dignified and painless death. Article 138 (2) (a) of the Health of Animals Regulations states that is prohibited to load or to cause to load an animal for reasons of infirmity, sickness, fatigue or any other cause that cannot be transported without undue suffering (unjustified and unreasonable) during the planned trip.” The inspector also recommended a pecuniary sanction.

This is what “foaling out” looks like on a feedlot in winter. Photo credit – Animals’ Angels & AWF.

Probably one of the most reprehensible aspects of the horse slaughter industry is the slaughter pregnant mares (and as a result, their foals), which occurs in violation of Canada’s Health of Animals Act. Slaughter plants in Canada do and will continue to butcher them; the only provision on both sides of the border is the transportation issue, which is largely ignored. Enforcement at auctions, border control and at the slaughter plant is minimal and questionably enforced.

The idea that horse welfare and CFIA oversight correlated in a linear way is just false.  There is a point of diminishing returns where increased welfare and attempts to hold individuals’ responsible costs more than any potential “market quality” you could get out of it. Notice also that while one inspector notes that “people should be made aware of this,” a second CFIA inspector congratulates him/herself on re-hydrating the mare #4617 sufficiently so that she can “have a dignified and painless death.”

Kill buyers, slaughterhouses, and the CFIA itself are all  financially incentivized to kill animals while providing little to no welfare oversight.

There are 16 Codes of Practice for animals but they are all voluntary, lack legal status, and are developed by industry dominated committees. They are out-of-touch relative to other standards elsewhere in the world.
https://www.nfacc.ca/codes-of-practice/equine-code

Leave a Reply to Fred and Joan Cancel reply